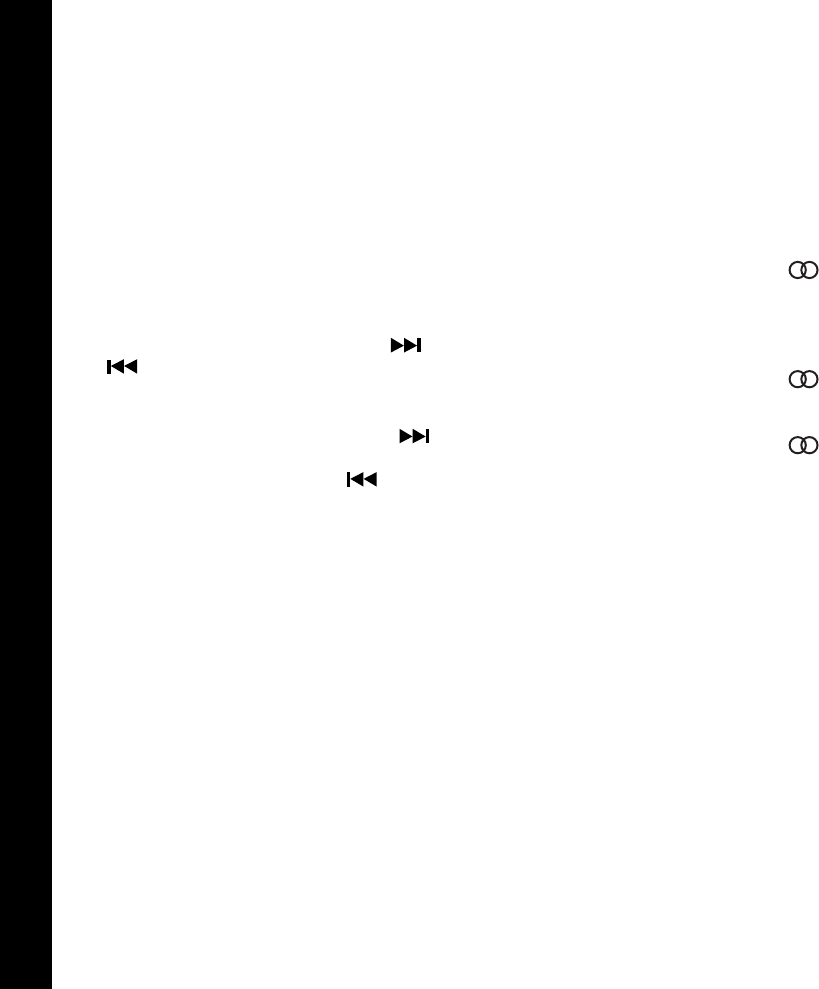 bl AM/FM BAND SELECTOR (BAND)
Each time this button is pressed, the radio
band is changed. The indication AM1, AM2,
FM1, FM2 or FM3 will appear on the display
panel according to your selection.
During disc play, pressing this button will stop
play of the disc and switch to radio operation
without ejecting the disc. During this time,
the indication will remain on the display panel
to show that a disc is still loaded in the unit.
Press the MOD button
bt to return to disc
play from the beginning of the last track in
play.
bm MANUAL UP/DOWN TUNING ( + /
- ) AUTOMATIC SEEK TUNING
(SEEK)
To manually select a radio station,
momematrily press the Up Tuning ( +
)
side of the button to advance the unit two
digits higher or the Down Tuning (
-) side
of the button to tune two digits lower.
Pressing either side of the button for longer
than 0.5 seconds and then releasing will
activate the Automatic Seek Tuning function.
The radio will seek the next station in the
selected direction and stop at that frequency.
The Seek function can be stopped by
pressing the button again or activating any
other tuning function.
Pressing and holding either side of the button
for longer than 0.5 seconds will cause the
radio to continue tuning rapidly in the
selected direction until the next available
station and stop there.
bn LOCAL/DISTANT SELECTOR (LOC)
This feature is used to select the strength of
the signals at which the radio will stop during
Automatic Seek Tuning. Pressing the button
will select the Local setting (LOC will appear
on the display panel) and only strong (local)
stations will be received. Pressing the button
again will select the Distant setting (LOC
will disappear from the display panel) and
the radio will stop at a wider range of signals,
including weaker (more distant) stations.
bo FM MONO/STEREO SELECTOR (MONO)
During FM radio operation, this button is
used to select mono or stereo reception of
the broadcast signal. Under normal reception
conditions, the unit should be left in the
stereo mode as indicated by the ST
indication on the display panel when tuned
to an FM stereo signal. If the stereo signal
is too noisy for comfortable listening, press
the FM Mono/Stereo Selector button to
switch to mono reception (the ST
indication will disappear from the display
panel). To return to stereo reception mode,
press the button again so that the ST
indication appears in the display panel.
bp PRE-SET SCAN (PS)
AUTO-STORE TUNING (AS)
Press this button momentarilyto scan the
stations pre-set into the 12 memories of the
AM bands or the 18 memories of the FM
bands. The unit will stop at each pre-set
station for 5 seconds before continuing to the
next pre-set station (the pre-set number on
the display panel will flash during Pre-Set
Scan operation). Press the button again
momentarily to stop Pre-Set Scan operation
and remain on the selected frequency. If no
buttons are pressed during the scan, the unit
will return to the original station before the
scan.
Pressing and holding the button for longer
than 2 seconds will activate the Auto-Store
Tuning feature which will automatically scan
and enter up to 6 stations into the pre-set
memories on the band in use. If you have
already set the pre-set memories to your
77
77
7
OPEROPER
OPEROPER
OPER
AA
AA
A
TT
TT
T
ING INSTRUCING INSTRUC
ING INSTRUCING INSTRUC
ING INSTRUC
TT
TT
T
IONSIONS
IONSIONS
IONS
previous next